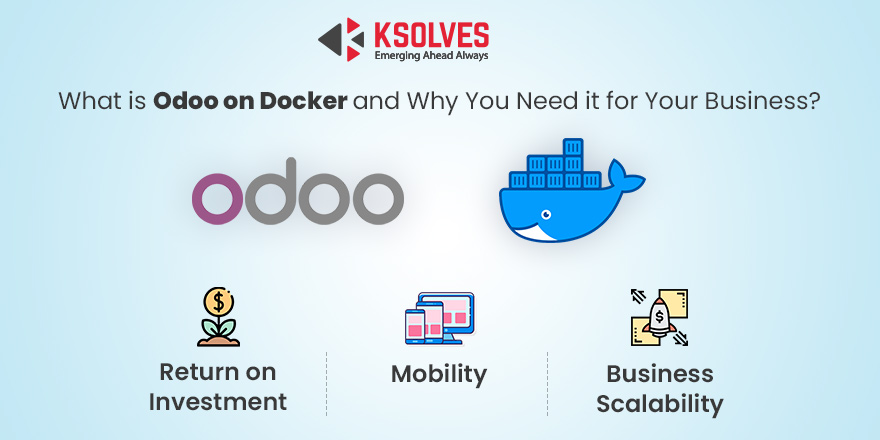 Docker is a platform that allows users and developers to deploy, build, manage, and run their apps using containers. It accomplishes this by virtualizing the OS (Operating system) of the device on which it will be running and installed.

Docker was founded by Solomon Hykes in 2013 to allow users to run multiple OS on a single computer. The hype has only grown after the release of Docker 1.0 in June 2014.

It has been found that more than 3.6 million programs have been deployed in containers using docker technology. The user does not have to worry about requirements, modules, or a variety of other concerns while utilizing Odoo Docker features.

Let’s understand what Docker is and its relationship with Odoo.

Docker is a tool that allows you to create containers that hold software installation. It includes everything you need to execute the software, like code, runtime, configuration files, executables, and system libraries.

Containers are standardized software units that enable developers to separate their programs from their ecosystem to run them on any system.

Why Deploy Odoo on Docker Container

The evolution of every technology starts with the aim to solve an existing problem.

Let’s see how the Docker container technology solves the problem of running different Odoo apps on a single server.

With Docker container technology, a user can solve this issue instantly without taking the risk to crash his system. When a user deploys Odoo on Docker it is deployed on a Host.

Docker container does not have any OS (operating system), but it has a virtual copy of the network interfaces and process tables. The virtual operating system is shared across all the containers.

It allows each container to stay isolated from each others while running on the same host. As a result, it allows numerous containers with varying application requirements to operate on the same host as long as they meet the same operating required functionality.

How to Install Odoo On Docker

If you want to Deploy Odoo as a Docker, follow the given instructions carefully.

To run Odoo Image on docker we need to do the following steps:

Tweak these environment variables to easily connect to a Postgres server:

The primary benefit of Docker Container Technology is ROI. The more a solution can cut down the cost the more ROI a company will get. Therefore, if a company utilizes Docker it can cut the infrastructure cost. The functionality of Docker is that only fewer resources are required to run multiple applications on a single server.

Any business planning to expand its services can use the Docker container technology to earn great ROI.

Developers may use containers to build stable environments that are isolated from other programs. Everything remains constant regardless of where the app is deployed, which leads to tremendous productivity: less time troubleshooting and more time introducing new features and capabilities for consumers.

If you are an Odoo application development company and need to scale your business, you can do it rapidly with Docker. You can use the Docker container and allow your application to run on any server anytime to your users. This will increase your business effectively and you can gain your user’s trust.

Docker Images are compatible with any operating system (Mac, Linux, or Windows). This reduces the time spent setting up environments, troubleshooting environment-specific bugs, and a more portable and easy-to-setup codebase for your developers.

If an upgrade is required during a product’s release, Docker containers may be readily modified, tested, and rolled out as new containers. Another significant benefit of utilizing Docker is its flexibility. Docker really enables you to create, test, and distribute images, which can be deployed across numerous hosts. Furthermore, Docker allows you to quickly start and stop services or apps, which is extremely important in a cloud setting.

By taking advantage of Docker’s methodologies for shipping, testing, and deploying code quickly, you can significantly reduce the delay between writing code and running it in production.

If you need more information about the same, kindly consult with our experts.

Parul Gautam Parul Gautam is a Sr. Technical Writer who believes in bridging the gap between customers and Technologies. She can convert the aura of any Technology into Powerful Words. One time she can Jot Down her words and at the other, she will Tap on the Beats of Great Music. To Taste the Recipe of her Writing, hang on to the great Blogs.

The innovations in the technological era have brought a lot to the table for businesses. For instance, the Odoo ERP […]

Many corporate organizations require XLS reports on a regular basis. Data manipulation and representation become simple with an XLS file. […]

HR managers have to maintain the payslips of the employees on a daily basis. Sometimes, it becomes tiresome to manually […]